Have any questions? GET IN TOUCH

IPv6 is the next generation Internet Protocol (IP) standard intended to eventually replace IPv4, the protocol many Internet services still use today.

Developed in 1981, IPv4 was the first type of IP addresses known as “Internet Protocol Version 4”. In this case, there are a possible 4.3 billion unique IP addresses. However, as the Internet of Things expand to greater sizes, the creation of IPv6 has to be developed.

Every IPv4 address is 32 bits longs. An example:

Now the difference here for IPv6, the IP address is 128 bits long. An example: 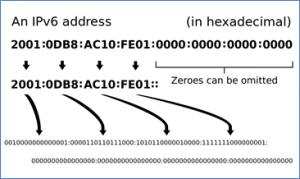 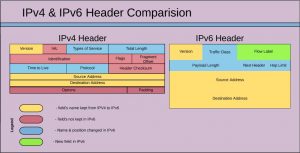 Besides allowing for the expansion of unique IP address to 340 trillion trillion trillion IP addresses or 3.4 * 1038, IPv6 can be created automatically by your host, allowing for elimination of both Network Address Translation (NAT), and Dynamic Host Control Protocol (DHCP). Another important aspect of IPv6 is through its tight security as it allows for a greater line of defense against hackers. IPv6 can run end-to-end encryption, as the encryption and integrity-checking currently used in virtual private networks (VPNs) are a standard component in IPv6, available for all connections and compatible with all devices and systems. Lastly the ability to connect between IoT devices allowing networked connected devices to speak to each other allows for greater inventions and connectivity of a network system.

The Transition Mechanism from IPv4 to IPv6

Steps for the transition between IPv4 to IPv6 with dual stack (IPv4 and IPv6 coexist in the same device): 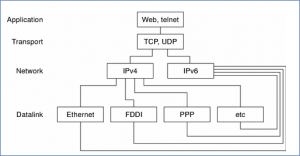 To minimize any dependencies during the transition, all the routers in the path between two IPv6 nodes do not need to support IPv6. This mechanism is called tunneling. Basically, IPv6 packets are placed inside IPv4 packets, which are routed through the IPv4 routers. The following figure illustrates the tunneling mechanism through IPv4 routers. 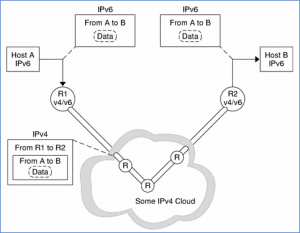 The different uses of tunneling in the transition follow:

There are different kinds of tunneling techniques that can be used:

Translates IP header fields, NAT Protocol Translation (NAT-PT) maps IPv6 to IPV4 addresses. The Request for Comment (RFC) however does not specify how to perform address assignment or how to route to and from IPv6 hosts when communicating with IPv4 hosts.

Challenges of Migrating to an IPv6 Network